Extreme Beauty: This series contrasts socially accepted standards of beauty with the extreme measures undertaken to achieve them. 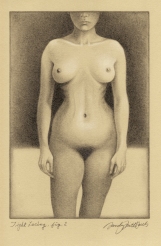 Artist Statement: “If tiny feet suddenly became fashionable, would American women subject themselves to foot-binding?” This was the question posed in an article of the Los Angeles Times, denouncing breast implants, with the headline “Draw the Line at the Knife”. Standards of beauty are continuously changing, but what is the often grotesque reality behind the extreme measures taken to reshape women’s bodies? I began to investigate these notions by exploring various bodyshaping practices beginning with ancient Chinese foot binding. The vision of a teetering, helpless young bride was considered erotic, and a family prosperous enough to support a young woman made—by design—unsuitable for any kind of physical labor, gained status within the community. However, the reality of these treasured “golden lilies”, were deformed, painful feet, often malodorous due to rotting flesh and infection. Corseting began at a very early age in Victorian England and North America of the 18th and 19th centuries, and extreme tight lacing had an understandably negative effect on the developing body of young girls, effecting not only outward appearance, but the growth and position of internal organs. The vision of the delicate swooning young woman at this time was considered ideal, but how robust and active could an individual be with a compressed rib cage, gasping for breath? A loosely corseted woman, by contrast, was judged not only to be imperiling her health but to be of loose moral fiber as well. Today, there is no longer a need for girls to be excessively corseted, when they are willing to carve out their own bodies through surgery or self-imposed starvation. The rise in incidence of anorexia, has  made clear how much young girls today have internalized societal ideals of beauty, just as foot binding and corseting of young girls and women were signs of past repression through the idealization of the female form.

One thought on “Extreme Beauty”